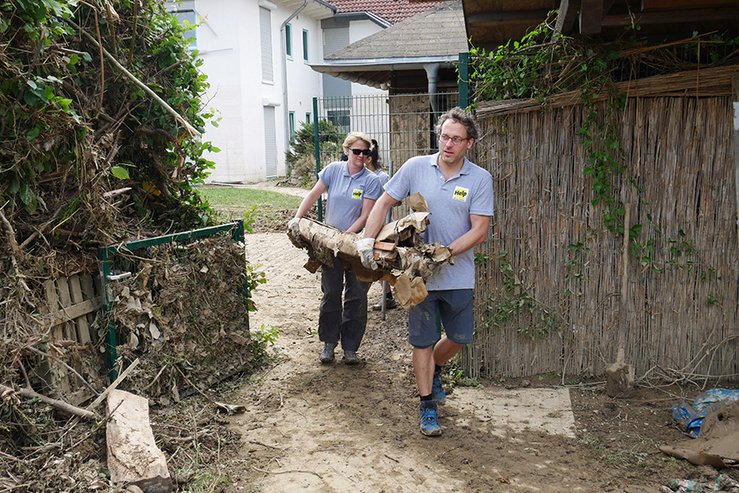 The relief organizations have been actively helping in the regions since summer (Copyright: Help – Hilfe zur Selbsthilfe)

Every year, Berlin-based company Quentic conducts a user survey to better understand the needs of its customers. The suggestions and points of feedback offered are then meticulously evaluated and incorporated into practical and needs-oriented solutions. To thank its community for their engagement, Quentic donates to a nonprofit organization active in the fields of occupational safety, environmental protection or sustainability for each completed questionnaire that is submitted.

The high level of participation in the 2021 customer survey has brought this year’s total donation amount to 2,500 €. The money will be donated to the Aktion Deutschland Hilft (Germany Helps) campaign, which has been providing aid to areas affected by the catastrophic flooding in Germany this summer.

In July and August 2021, heavy storms and flooding have brought a level of destruction and damage not seen in decades to the Rhineland Palatinate and North Rhine-Westphalia, as well as other parts of Western and Central Europe. In the weeks following the flood, helpers organized emergency shelters, searched for missing persons and provided medical aid. Now, months later, the organizations are assisting in the lengthy process of rebuilding and continuing to support the people who have been affected. As the winter season starts and temperatures drop, financial means are needed to provide temporary housing and heating units.

“The catastrophic flooding this summer has shaken us and our community. At the same time, it was comforting to see how much attention and engagement the topic received. We are happy to be able to make this donation and do our own small part towards overcoming this crisis and similar events in the long term,” says Markus Becker, CEO of Quentic.

Stay up to date with the latest developments relevant for your EHSQ and ESG management. We want to inform you about upcoming webinars and events and current articles.

Enjoy a sneak peek at our solutions. For free, with no obligation to buy.

Stay up to date on upcoming events.

Or email us
X